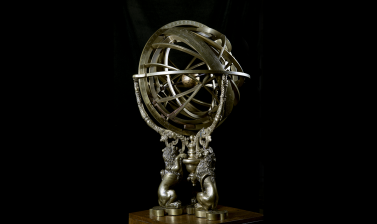 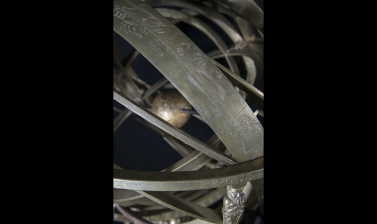 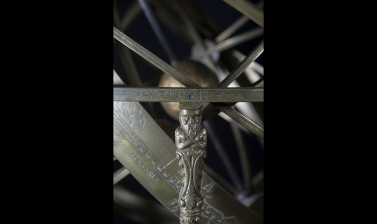 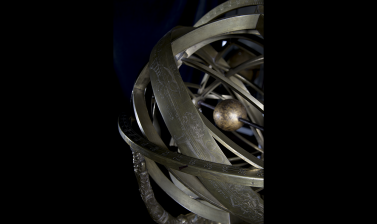 This large and impressive brass armillary sphere is both a working astronomical instrument and a decorative object of display, with a finely modelled sculptural base. It is constructed according to the ancient geocentric view of the Universe, as codified by Ptolemy in the second century CE. Surrounding the Earth are the great circles of the heavens, with the Sun in the broad ecliptic band of Zodiac signs. Once set up for the user’s latitude, it can solve problems of spherical astronomy, such as the time of sunrise on any day of the year.

The instrument is unsigned and of uncertain origin, but is thought to have been made in mainland Europeo. However, the heraldic devices engraved on the base show that it had arrived in England by the 1590s and come into the possession of Henry Percy, 9th Earl of Northumberland (1564–1632). Percy is known as ‘the Wizard Earl’ because of his interests in astronomy, astrology, alchemy and other branches of natural philosophy. He employed the leading mathematicians of his day, and was even visited by them during his 16-year imprisonment in the Tower of London on suspicion of involvement with the Gunpowder Plot of 1605.

Before this personal disaster, the sphere had already passed to Sir Josias Bodley (1550–1618), the younger brother of Sir Thomas Bodley (1545–1613), who founded Oxford’s Bodleian Library. In 1601 Sir Josias presented the sphere to Bodley’s library but it was kept at Sir Thomas’s London house until his death in 1613. It has been in Oxford ever since, firstly on display in the Bodleian, then lent to the University Observatory in the late 1800s, and finally coming to the History of Science Museum in the 1950s.

See an armillary sphere in action

Discover the different elements of an armillary sphere