This camera belonged to T.E. Lawrence, who used it on his archaeological excavations. The camera was made by J.H. Dallmeyer in around 1910. It is a shallow box-form, front-focusing, mahogany quarter-plate hand-held camera, with a rise-and-swing front lens panel. Alongside the camera, there are a number of lenses in small Morocco leather-covered cases, a dark cloth and six dark plates, all of which are kept in the leather carrying case. This case is divided into two compartments, lined with green velvet and has a brass lock and hinges. When the lid is opened, Lawrence’s address can be seen, inked onto the front of the leather.

Object on receipt: view of the front.

Showing split in the leather along the hinge.

Showing the re-attached dividing board.

Tissue repair to split in leather prior to pigmentation.

Tissue repair to the split inserted behind the textile. 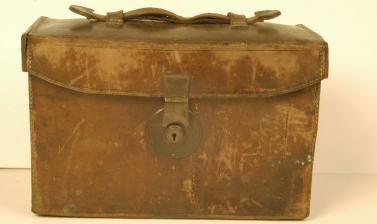 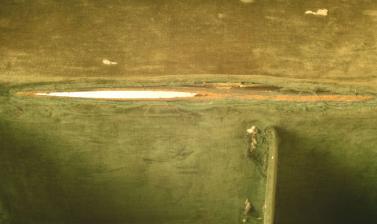 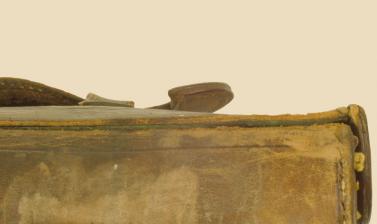 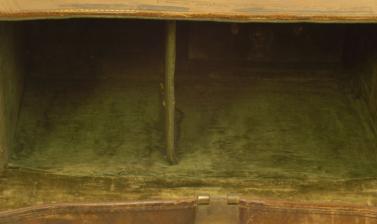 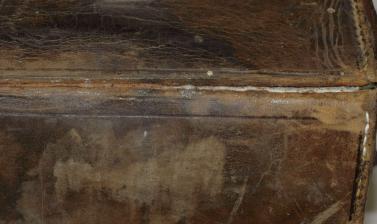 The exterior of the camera case was very worn, scuffed and abraded from use; much of the stitching had failed, particularly at the corners and along the carrying handle. There were a variety of marks on the surface of the leather, including watermarks, spots of white paint and remnants of adhesive labels. The majority of the damage was along the hinged lid area, where the leather had split. The lining was worn and had been considerably faded through light damage, particularly on inside of the lid. The one remaining textile-covered dividing board (forming the compartments inside the case) had come adrift from its attachment to the back of the case.

To begin with, the interior of the case was vacuumed using miniature attachments, and the hard-to-reach corners were cleaned with a micro-vacuum pump. Areas of lifting textile were then re-adhered back into position using wheat starch paste; gentle humidification was used for the larger curled-up areas.

Due to the damage around the stitch holes on the leather handle, it was decided to adhere the two pieces of leather together using wheat starch paste, instead of passing new stitch threads through the existing holes, as this could possibly cause more damage to the already vulnerable leather. This area was then held together using silicon release paper and strained paper clips until the adhesive had cured. Attention was then given to other areas where the stitching had failed. Although these areas are quite numerous, it was decided to only re-stitch the two areas where further damage could be prevented.

It was decided to implement a repair to the long split along the hinge to the lid using a Japanese Mulberry tissue. First, the interlining board in the lid was adhered back into place, then the repair tissue was inserted behind the lifting textile lining and the inner side of the leather or board interlining, and adhered into place using the wheat starch paste. Sections were weighted with a small bag of lead shot until the wheat starch paste had dried. A secondary layer of repair tissue was applied to the edge of the split to further strengthen it. It was then pigmented with gouache pigments to tone down the whiteness of the tissue repair.

Want to find out more about conservation at the Museum?