Lewis Carroll’s wet-collodion outfit of photographic chemicals with his initials on the lid of the case.

A photograph taken by Dodgson (better known as Lewis Carroll) of Annie Rogers and Mary Jackson as Queen Eleanor and Fair Rosamund. 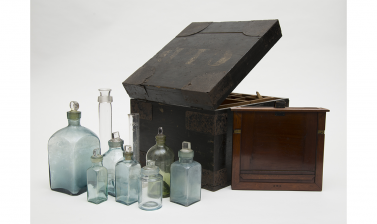 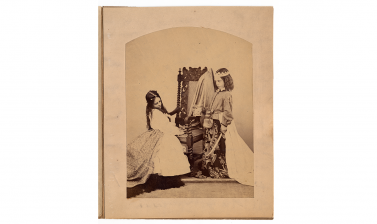 The lid of this wooden box carries the initials C.L.D. for Charles Lutwidge Dodgson (1832–98), who is best known as Lewis Carroll, the author of Alice’s Adventures in Wonderland (1865) and Through the Looking Glass (1872).

Dodgson was a clergyman and a mathematician at Christ Church, Oxford. In 1856, at the age of 24, he took up photography, then still a new art form. He soon became a well-known gentleman-photographer, finding it a useful entrée into higher social circles. He made portraits of many notable sitters from the arts and sciences, such as John Everett Millais, Ellen Terry, Dante Gabriel Rossetti, Julia Margaret Cameron, Michael Faraday, Lord Salisbury and Alfred, Lord Tennyson. He also photographed local figures, including the daughters of the Dean of Christ Church, Henry Liddell. Alice Liddell became the inspiration for Alice in Wonderland when she asked Dodgson to tell her a story during a boat trip on the River Thames.

By the time Dodgson abruptly ceased photography in 1880, he had established his own studio and created around three thousand images, though fewer than a thousand survive. The chemicals contained in this box were used both to prepare the photographic glass plates before taking a picture, and also to fix and wash the image afterwards.

The Museum has one photograph by Dodgson, featuring a famous Oxford legend. Probably taken on 3 July 1863, it shows Annie Rodgers on the right dressed as Queen Eleanor, the wife of Henry II, and Mary Jackson on the left as Fair Rosamund, his mistress. Eleanor offers her rival the choice of a dagger or poison, while Fair Rosamund kneels, her hands clasped.