The dried-up contents of this cotton-sealed flask are one of the original cultures from which Florey’s team extracted penicillin.

The dried-up contents of this cotton-sealed flask are one of the original cultures from which Florey’s team extracted penicillin.

A small vial that contains penicillin recovered from the urine of patients. 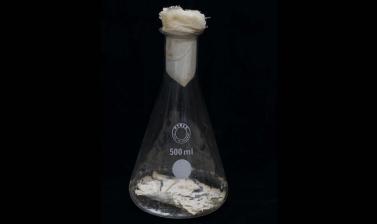 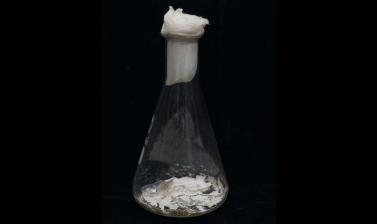 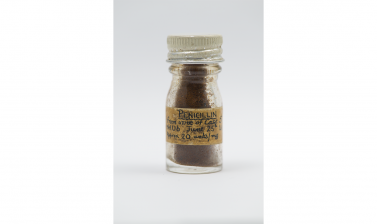 The discovery of the antibacterial properties of penicillin by Alexander Fleming (1881–1955) is legendary, but the wartime transformation of this breakthrough into a clinical product for patients was achieved at the Sir William Dunn School of Pathology in Oxford. Howard Florey (1898–1968) led a team, including Norman Heatley and the German refugee Ernst Chain, that laid the basis for an industry of antibiotic production that transformed Fleming’s biological curiosity into a tool that fundamentally changed medicine.

Penicillin is produced by a fungus that can be cultured. The dried-up contents of the cotton-sealed flask are one of the original cultures that Florey’s team used to extract penicillin. Early tests on mice were very promising, resulting in Florey’s laboratory being transformed into a production centre to make enough penicillin for human clinical trials in 1941. 2000 litres of culture fluid were required to obtain enough penicillin to treat a single case of sepsis. The team therefore worked hard to increase the yield from the cultures. So precious were early stocks of the drug that none could be wasted. When administered, not all the penicillin was metabolised and some could be recovered from the urine of patients and reused, as witnessed by this tiny glass vial dated 25 June 1941.

Almost miraculous recoveries from apparently fatal infections demonstrated the therapeutic value of the antibiotic. Wartime Britain was unable to produce penicillin on the scale so urgently required, so Florey and Heatley made a secret visit across the Atlantic in 1941 to mobilise American interest. Pharmaceutical companies in the United States banded together to devise and develop a new, much higher-capacity industrial process, which was used to save countless lives.