The Museum’s generous interpretation of ‘science’ has always embraced photography, so that photographs have also been collected in their own right, as complementary to collecting cameras and other photographic apparatus and materials. They include specimens of the early photographic processes – from daguerreotypes to early colour photographs; but they also include some surprising treasures. Outstanding among them are the early photographic experiments of Sir John Herschel, dating from 1839 to 1844. A few experimental photographs by the inventor W. H. Fox Talbot, from the year of the invention, 1839, are included with the Herschel collection; while from a different source come two calotypes (salted paper prints) by Talbot dated 1842. A daguerreotype of Notre Dame by Lerebours, about 1840, is the earliest example of the rival French process.

There are extensive files of photographs of scientific instruments as well as a significant collection of portraits of scientists. Archival collections often include photographs, from the personal albums compiled by R. T. Gunther to the extensive photographs in the Elliott company archive, mostly taken for promotional purposes. Paper photographs of course predominate, but glass negatives are also held. The Museum has preserved glass lantern slides, dating from before photography to the 1950s, including the lecture slides of a number of scientists, which are of archival rather than photographic interest.

Naturally the Museum’s interest has been more in the scientific or technical relevance of photographs than in their artistic or pictorial value. Even so, several notable items in this genre are also held, including calotypes by Hill and Adamson, a version of Rejlander’s ‘Two Ways of Life’, one of Julia Margaret Cameron’s famous portraits of Herschel, and an example of the work of Oxford’s own C. L. Dodgson (Lewis Carroll). 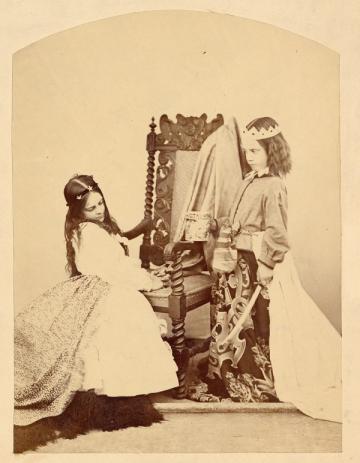