Science in the Islamic World

We are guardians of the world's most comprehensive collection of astronomical instruments from the Islamic World.

But what do we mean by 'Islamic'?

Ranging from the 800s CE to the present day, these scientific objects were created and used by people living in lands where the majority religion was — or is — Islam.

While the artisans who made them came from different regions — Europe, Africa, the Middle East and Asia — the objects themselves still share many similar, distinctive characteristics.

And though the instrument makers all lived and worked in the Islamic World, they were not all themselves Muslim.

The result is a fascinatingly rich and diverse collection.

Maps
A History of the Islamic World in 11 Maps

A History of the Islamic World in 11 Maps

A History of the Islamic World in 11 Maps

A dynamic history with object stories

From 622 CE — when the prophet Muhammed emigrated from his native city of Mecca to Medina — to the present day, what we call the Islamic World has experienced dynamic change.

Discover a History of the Islamic World in 11 Maps — a fascinating journey of scientific, artistic and cultural influence across four continents.

Explore a dynamic history of the Islamic World in 11 maps, illustrated with objects and stories from each period

A Century of Islamic Expansion

A Century of Islamic Expansion

Artistic Unity in the Islamic World

Artistic Unity in the Islamic World

The Influence of Islamic Culture

The Influence of Islamic Culture

Working for the Rulers

Working for the Rulers

Click on a map to see it full size
Map artist and curator: Mathilde Daussy-Renaudin

Are you a researcher or student needing more information? Please do email our Curator 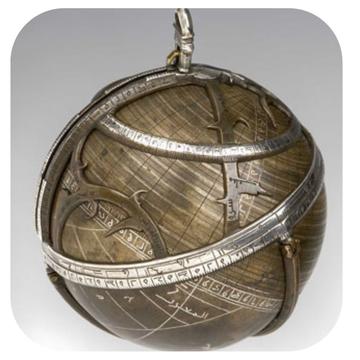 The world's only surviving spherical astrolabe 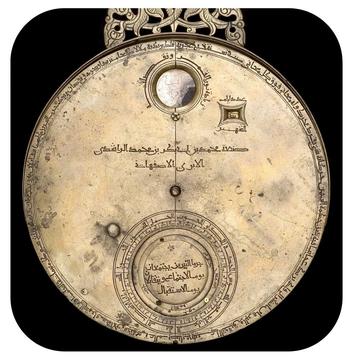 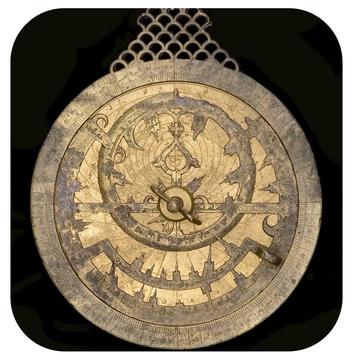 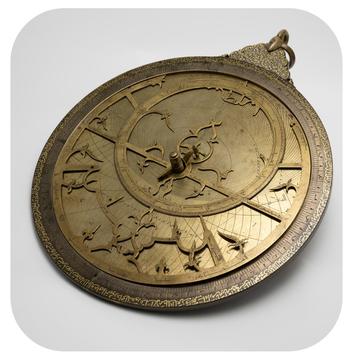 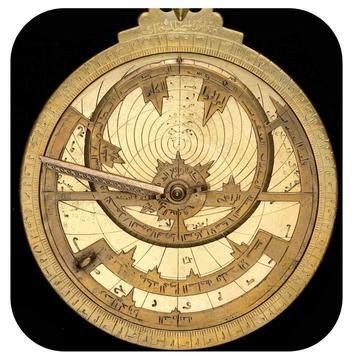 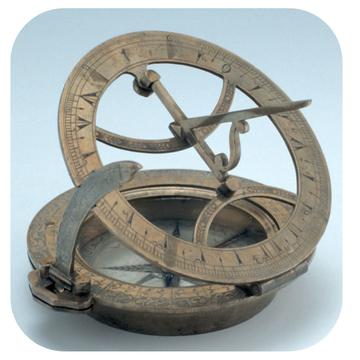 West meets East: combines a sundial made for the Ottoman market with a Safavid (Iranian) Qibla indicator 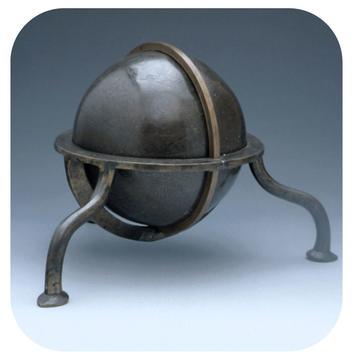 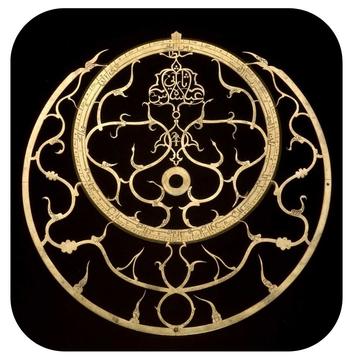 The collection includes the:

What is an astrolabe?

An astrolabe is a map of the sky, showing the position of the stars on a flat disk.

They were popular for more than 1,500 years; in some parts of the world, they were still in use until the early 1900s. You can use astrolabes to tell the exact time, calculate the hours of prayer, measure height and angles, and even predict the future.

There are two main parts — the ‘star map’ (called a rete) and a projection of the earth’s surface. You can move the rete to imitate the regular movement of the stars above our heads; make one full turn, and a day has passed under your hand.

Beautiful works of art in their own right, each astrolabe and quadrant in our collection has a different set of stars, decorative features and intricate details. 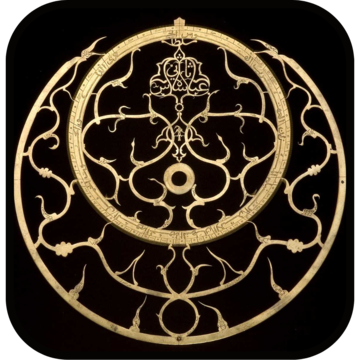 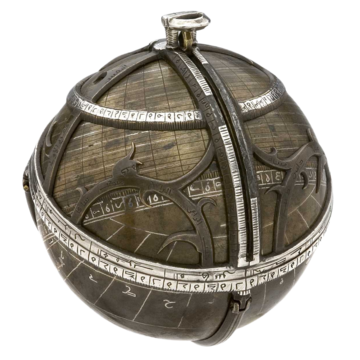 We look after a fine collection of celestial globes from the Islamic World.

Celestial globes are spherical maps of the sky.

With the Earth at their imaginary centre, they show the stars and constellations seen from outside the celestial sphere looking back at the Earth i.e. a “God’s eye” view.

They often have the star names engraved and the constellations drawn in to make them easy to identify.

On celestial globes made in the Islamic World, the head of every human figure is turned towards the observer while the rest of the body “looks” inside. This makes right-handed figures appear to be left-handed, and vice versa (look out for Perseus wielding a sword in the left hand rather than the right).

To explain this difference between a constellation as seen from the Earth and as seen on a globe, the Persian astronomer al-Sufi (903-986 CE) drew two pictures for each constellation in his Book on constellations: one for the terrestrial view with front-facing, right-handed figures, and the other for the mirror-image celestial version — still facing front, but now left-handed.

When in use, globes are usually mounted in a frame, so users can rotate and tilt them to different latitudes. But these instruments are more than astronomical tools and teaching instruments. The technical skill and artistry used to engrave the stars and zodiac signs mean they stand as artworks in their own right. 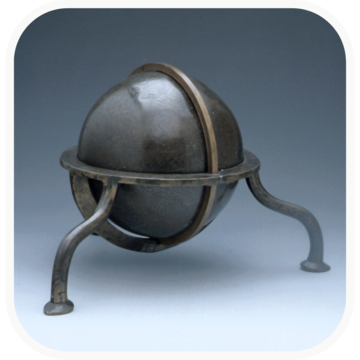 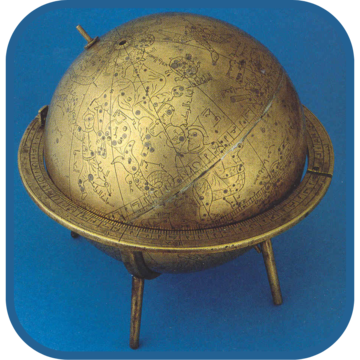 Our collection of qibla indicators and sundials ranges from the 1600s CE to the present day.

Named after the Arabic word for ‘direction’, a qibla indicator is a type of modified compass which Muslims use to determine the direction they need to face to perform their prayers (towards the Kaaba — the sacred mosque at Mecca).

Practising Muslims still use them today, although increasingly in the form of a mobile app. Many of our qibla indicators are lavishly decorated with beautiful engravings. 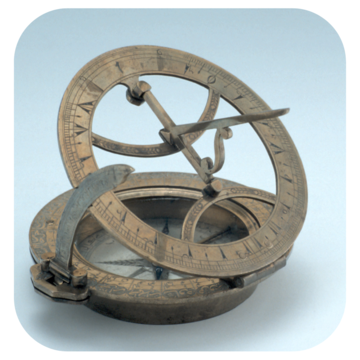 The History of Science Museum holds a collection of 49 alchemical manuscripts brought together by Henry Ernest Stapleton (1878-1962), chemist, educational administrator, and historian.

Most of the manuscripts are alchemical treatises in Arabic script — both antique manuscripts and modern copies of originals — dating from 1500 to 1956 CE.

The collection also includes papers and correspondence of Stapleton himself discussing and analysing manuscripts similar to these (1894-1961 CE). 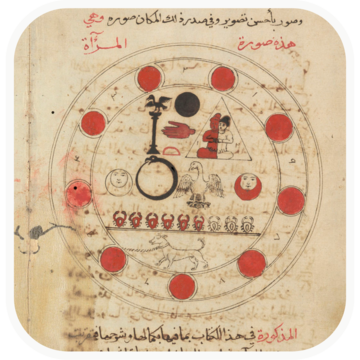 Our Learning team offer a great selection of interactive workshops, linked to the National Curriculum, including sessions themed around science in the Islamic World.

Blended learning
Do you want to experience hands-on learning in the Museum galleries?

Or bring the wonder of museum learning into your own classroom?

Talk to our Learning Producers to find the in-person or online learning solution that's right for you. 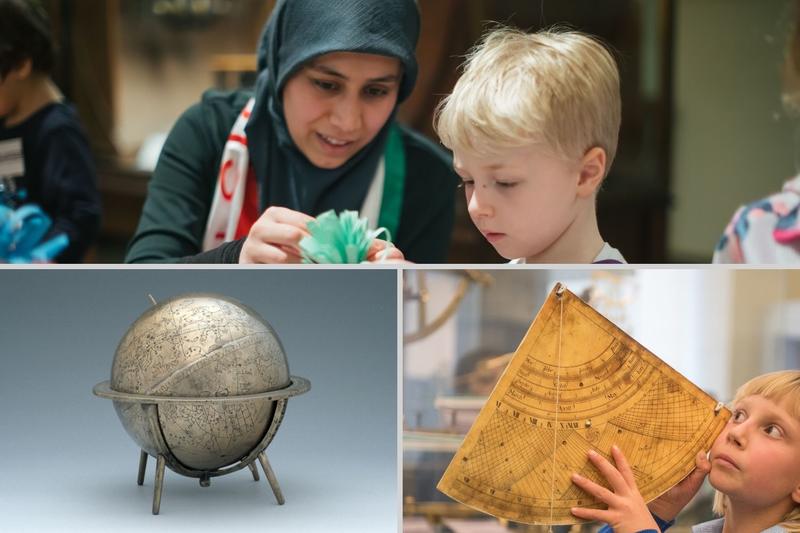 Discover some of the amazing inventions and discoveries from the Early Islamic World and make your own pinhole camera.

House of Wisdom (In Gallery)

House of Wisdom (In Gallery)

Learn how to use a quadrant (angle measurer) and a Quibla indicator (device which shows the direction of Mecca).

Introduces the extraordinary advances made in science and mathematics during the so-called ‘golden age’ of medieval Islam.

Science and Islam (In Gallery)

Science and Islam (In Gallery)

Explore the scientific achievements of early Islamic cultures, focusing on the astrolabe.

Brings communities together, strengthening understanding through the mutual sharing of art, stories, culture and science.

A display in the Islamic World collection.

Mirror of the Stars

Mirror of the Stars

Explore how astrolabes mirrored the traditional view of the Earth at the centre of our moving universe.

Precious and Rare: Islamic Metalwork from The Courtauld

Precious and Rare: Islamic Metalwork from The Courtauld

Immerse yourself in six centuries of Islamic artisanship.

Al-Mizan: Science and Arts in the Islamic World

Al-Mizan: Science and Arts in the Islamic World

Explores the connections between the sciences and arts in Muslim societies

The Astrolabe, East and West

The Astrolabe, East and West

Celebrating a thousand years of astrolabes in the History of Science Museum collection.

Ten beautiful, ingenious astrolabes from Africa ranging from the 13th to the 19th century.

Starholder: The Lives of the Astrolabe

Starholder: The Lives of the Astrolabe

Shows how astrolabes can enrich our understanding of the past. 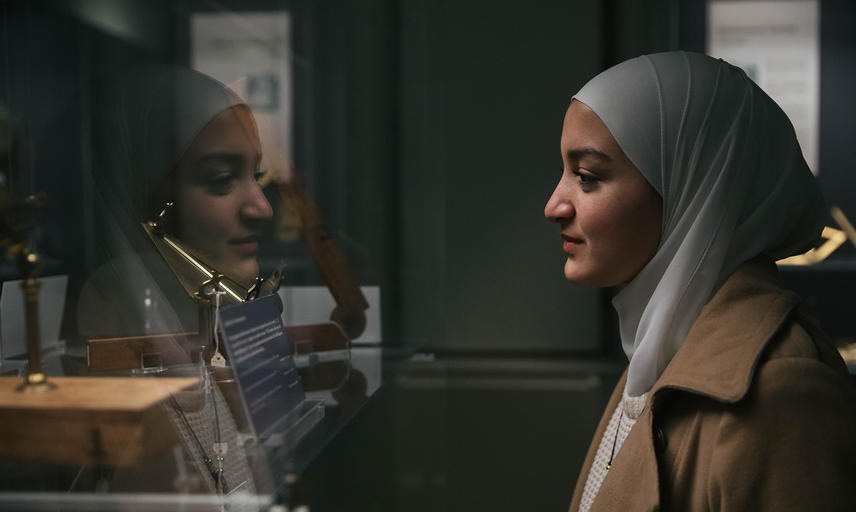 Thanks to your generosity, we can keep highlighting ingenious stories that spark curiosity with as many people as possible.

I want to support my Museum
Fancy a souvenir of your visit? 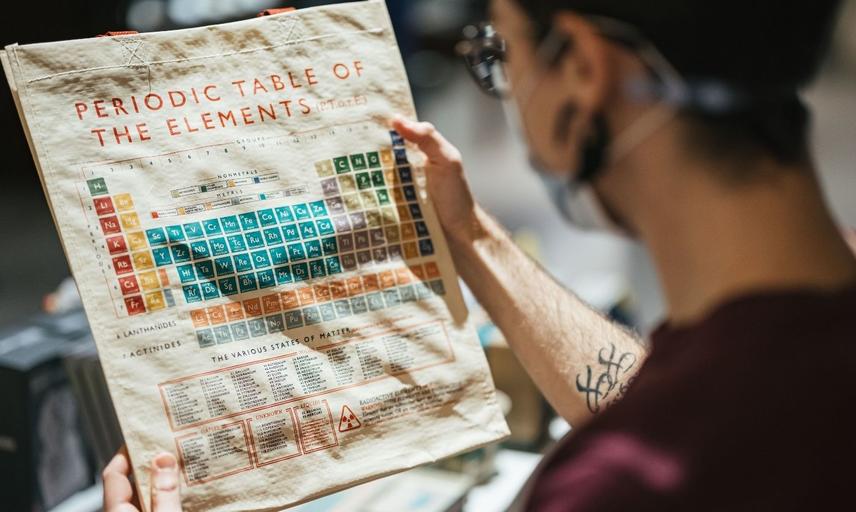 Fancy a souvenir of your visit?

Fancy a souvenir of your visit?